Changes to Building Regulations will impact the way new buildings are designed and built – SAP assessments are at the forefront of this change – developers, architects and self-builders take note!

The government has an aim for all new homes in England from 2022 to cut CO2 emissions by 31% following the proposed introduction of “interim” uplifted standards contained in Approved Document L, Volume 1: Dwellings (Conservation of Fuel and Power), which is expected to come into force on 15 June 2022.

Dwellings will be assessed under the new SAP 10 methodology, which will apply to new schemes only that have not started the building regulations process.  Changes to Part L and Part F (ventilation) were released in Decemberalongside a new Part O for overheating in homes.

The move is part of the government’s roadmap towards a new Future Homes Standard in 2025, when all new homes will need to reduce emissions by at least 75% and the use of fossil fuel-based heating will be banned.

The interim uplift to Part L standards will be seen as a stepping stone to the 2025 deadline.

The consultation response sets out a notional building specification for the interim uplift to Part L standards, which the Government describes as a “fabric + technology” mix of insulation, energy efficiency and low-carbon heating technology.

The changes focus on greater fabric performance, lower energy demand and a move away from fossil fuels and will include…

Changes to the minimum insulation standards and the way that the carbon emissions target is calculated will demand greater performance for new homes in SAP 10.  The notional values for certain elements used in SAP have been tightened, which means better performance will be needed to meet the target in SAP 10.

Under current regulations, SAP uses an outdated carbon factor from 2012 (the measure of carbon associated with every kWh of energy use) and assumes that electricity from the national grid produces 2.4 times more carbon than mains gas. Under the new regulations a more accurate figure can be applied, thus favouring electric systems.

Under the government’s current plans, gas and oil boilers will be banned in new-build homes from 2025. The government has stated that “… a low carbon heating system will be integral to the specification of the Future Homes Standard and we anticipate that heat pumps will become the primary heating technology for new homes”.

The draft Part L will see the removal of approved construction details that are out of date and a raft of updates to Compliance Guides, including standardising terminology. Heat losses owing to junctions in the construction have, up until now often been offset by using Accredited Construction Details. This gives designers and contractors a set of junction specifications to follow, which in turn allows the SAP assessor to apply improved values to thermal bridging.

Due to concerns over the accuracy and age of these ACD junctions, SAP 10 has taken away the option to follow them. Bespoke heat loss values calculated for each junction will therefore play an important role in meeting the new Part L targets.

A new target primary energy rate has been introduced in SAP 10 for new homes. This is the maximum primary energy use for the dwelling in a year. This brings the building regulations more in line with standards like Passivhaus, which use a primary kWh target.

There are new requirements when assessing extensions to existing dwellings. In previous regulations, only a total CO2 emission rate was required to show compliance, however the dwelling and its proposed extension will now need to show compliance against a primary energy rate and a whole dwelling fabric efficiency target.

6. Air permeability testing for all homes

In previous regulations it was possible in some cases to carry out air permeability testing on a sample of homes, subject to construction types. This has now been removed so that every unit will be subject to such testing.

A new Building Regulations document called Part O is being introduced to try to mitigate against buildings becoming too hot to use during the summer months. Bodies such as the Greater London Authority have worked together with CIBSE to develop techniques to assess and mitigate overheating risk from the urban heat island affect and future climate change.

New homes and other buildings will now be expected to provide electric vehicle charging points and/or cable routes for future connection, which will be governed under an entirely new Building Regulations document, Part S.

For more detail on the changes and what they mean for you and your clients’ projects in 2022 and beyond, please get in touch. 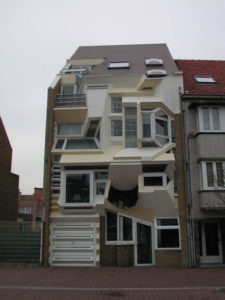