The Government has confirmed that non-domestic rented Buildings will need to meet an EPC rating of B, by 2030.

In October 2019, the Government consulted on proposals that would further improve the existing MEES regulations, in order to set a new long-term regulatory target of EPC Band B by 2030. This was an ambitious target that aims to drive clean growth and reduce emissions across non-domestic rental buildings, which has now been confirmed, with widespread support in favour of the change.

The bigger picture is that this will result in lower running costs, and more energy efficient buildings for the building user, with increased take-up of Low or Zero Carbon Technologies (LZC).

Prior to 2030, the government has confirmed that non domestic buildings must achieve a C rating by 2027, to ensure early action is taken.

Commercial property owners, with a large portfolio, will need to start taking action quickly to meet this requirement.

Aldrock is already working with pro-active clients that want to meet these targets, but more importantly see this as their environmental responsibility and believe that as time passes, people renting properties will favour those with an ethical stance on sustainability and lower running costs. 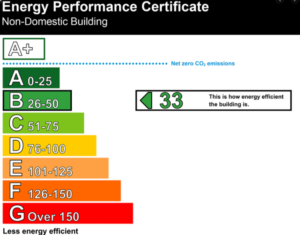