Aldrock are delighted to announce that they were appointed by National Energy Action (NEA) last year to design, procure and Contract administer the remediation and refurbishment of properties in the Fishwick area of Preston, which were left with damp and mould issues after a retrofit External Wall insulation scheme in 2013 failed.

‘Homes in the Fishwick area of Preston took part in a national energy efficiency project in 2013 which at the time, was designed to help keep their homes warm and safe, but has since been described as a “failure.” The company that took charge of the scheme nine years ago, left the residents with mould and damp homes due to incorrectly installing external wall insulation.’

Dozens of households in Preston were living in mould and even mushroom infested homes for nine years due to “cowboy” contractors’.

Aldrock have been working on this project for several months and now that work has started on site, we are looking forward to delivering a smooth project, that will improve the lives on residents.

Following months of work in the Community, Aldrock have been identifying issues and creating bespoke Scopes of Work to rectify the problems. Just recently Seddon Building Contractors of Bolton, have been appointed as the main Contractor, following a stringent procurement period.

Guy Shorrock, Manging Director at Aldrock said ‘We are delighted to be involved in this Flagship scheme to address these issues that are far too common in projects of this type. We have spent several months working with our client to ensure this project sets the standard for retrofit projects going forward. We are also delighted to be working with Seddon Contractors on this project. We look forward to making a difference in the Community! As a multi-disciplined Practice of Building Surveyors, Architectural Designers and Energy Assessors, we are perfectly suited for a project of this type’

Adam Scorer, Chief Executive of National Energy Action, said, “As a charity we try to put people at the heart of what we do. It’s important to us that we work closely with people in Fishwick to make sure that we avoid the mistakes of the past. Insulation, done well, makes homes warmer and cuts the costs of heating. It was not done well for many in Fishwick and they have paid a heavy price in homes that are not the warm and safe place that they should be. We know that we cannot solve all the problems caused in 2013, but we hope to make things better for some of the worst affected households and we will use the experience in Fishwick to press for action for people living in similar conditions across the UK.’ 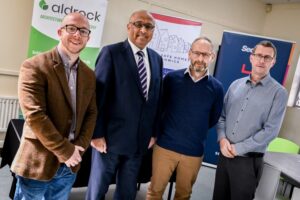